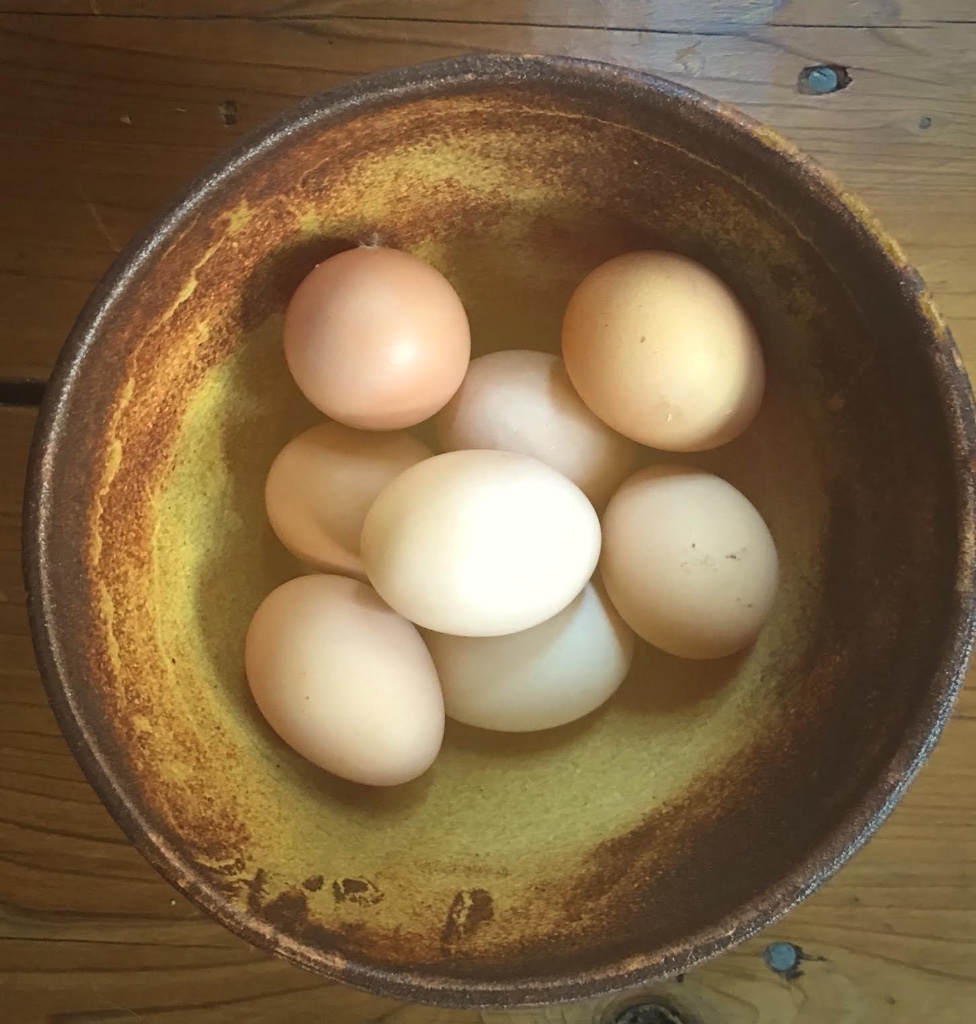 Chef Poppy takes us to North African for this recipe! A Tagine is a Berber dish named for the earthenware pot it is cooked in. The pot has a “chimney where the steam rises and goes back into the pot.” We cooked our tagine in a regular stock pot, just as you would make a stew, for a tagine is really a stew. The main difference is that the spices are mostly Moroccan and dried fruit is added for an unusual sweetness as it combines with the spice rub. I rubbed the spices onto the meat and let it sit in the fridge overnight.  The next morning when I sautéed the meat, the smell was glorious. The only thing I added to the stew when it was done was salt. 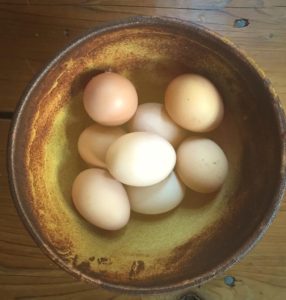 Fresh eggs from my neighbor

Mix the spice rub ingredients together in a small bowl. Put beef into a large bowl and massage it with the spice rub. Cover with plastic wrap and put in the fridge for a few hours or overnight, like I did.

Heat some olive oil in a tagine, casserole-type dish, or stock pot. Fry the meat over medium heat for 5 or 10 minutes, browning each side. Add chopped onions and fry for another 5 minutes. Add chopped tomatoes, chickpeas, stock and dried apricots.  Cook for a total of 3 hours, checking the liquid level and tenderness of the meat.

Toasted Israeli Couscous
Israeli couscous, also called pearl couscous, is similar (but larger) to the couscous you are probably more familiar with in that it’s a small, whole grain-like food made from semolina or wheat flour. While I’ve always seen it labeled as Israeli couscous, it is also known as “pearl couscous,”  “Jerusalem couscous,” or, as it is known in Israel, “ptitim.” Bob’s Red Mill, one commonly known brand, labels their product “Natural pearl couscous.” I found it in the bulk aisle at Staff of Life Market. I toasted it in a frying pan with olive oil, stirring to make sure it didn’t burn. Toasting couscous adds an additional level of flavor which I love, but if you don’t have time, you can cook it in simmering water. It is a wonderful dish, especially with the spicy tagine on top. I often spice up the couscous, but kept it quite plain, adding multi-colored bell peppers for color.  I kept it plain because the tagine was the star, containing most of the flavor.

*Generally I add about twice the amount of water as couscous, but I haven’t measured in years, as I add the water little by little.

Add olive oil to a non-stick pan and add couscous. Stir until the grains are browned. Be careful not to burn. Some grains will be darker than others. Add water until couscous is soft, stirring at intervals. This will take about 15 – 20 minutes. Add diced peppers and chopped cilantro as well as salt and pepper. If you want to spice up the couscous, add cumin, turmeric, and fennel seeds, of whatever else you like. We made the couscous spicier at a class last year when we added roasted chicken, which was not spicy. The balance is important.